This is SpaceXâs Falcon 9 rocket in LEGO. The model featured above is based on the first rocket that SpaceX successfully landed (Flight 20, Orbcomm OG2 M2), it has:

This is a companion discussion topic for the original entry at http://reprage.com/post/lego-falcon-9
Tyler_Jensen October 6, 2017, 3:44am #2

Do you have the name or BrickLink number for the fairing part?
How do the legs work? When you want to fold them up do you just remove the 4 skinny pieces?

Wow this is awesome. I’m totally going to buy the parts and make it myself, but i did notice that there are 2 updates on your lego ideas pages and I would be grateful if you updated the parts list. I’ll throw some bitcoin or other form of payment your way.

Hey thanks! I setup a paypal thing, lemme know if that works. Monster update on way.

Go to paypal.me/reprage and type in the amount. Since it’s PayPal, it's easy and secure. Don’t have a PayPal account? No worries. Getting one is fast and free.

Just sent it. Have you considered making 2 side boosters for the falcon heavy?

I have the two fairings 92591, but what is the number for the round tip at the top of the two fairing halves? Thanks for posting this information! I’m presently building two of them!

It is 86500, from Set 8037: Anakin’s Y-wing starfighter. Full parts listings are now available for each of the stage 2 variants (Dragon, Dragon V2 & fairing).

Heavy is on the list, currently working up a drone ship first though, and possibly a strongback for the revised stage 1.

I just built this (everything but the Dragon 2). Comments: Landing legs are pretty awesome. The whole rocket is super fragile though, it seems like it needs a little more strength. Not sure if more of the solid 4x4 rounds should be used for the body. The stage 1 engines need some more design, IMHO. They fall off super easily. If anyone orders the parts for this, order a bunch of extra 1x1 grey nosecones, you will have some drop off and you might not find them. Not sure if there is a better part for this, that is my major issue with the design. It is still really awesome, thanks so much for the work you put into it!

Thanks for the awesome feedback. I was thinking of borrowing another idea from the space port set to strengthen the cores. LEGO uses long axles threaded through the centre of their liquid fuel tank and solid rocket boosters. Will do another update with those included. But need to put some more thought into the stage 1 engines. Don’t have a better solution to that yet.

Could you fling me a couple of pictures of your build? Would love to see how it turned out.

My final shipment just came in today, and I’m loving it. I built the Dragon v2 and Orbcomm payload/fairing, as well as the 1st stage.

While I understand the actual legs are concave up, I put mine on concave down and I think it looks smoother. Just personal preference, but if anyone building this reads this, maybe try it out.

As said below, the Merlin engines really stink, they fall out too easily. It’s a tighter fit if you put a black, round, thinner plate in between the cones and the black technic cylinder, but I think I’ll end up gluing them in.

On the Dragon 2 part, I really don’t like the 1x2x1 wall elements as fins. I don’t know if they’re supposed to be free to wiggle, or if I put it together wrong, but if you, or someone, comes up with something to replace them with, I’d be all over that.


[Album] Imgur: The magic of the Internet 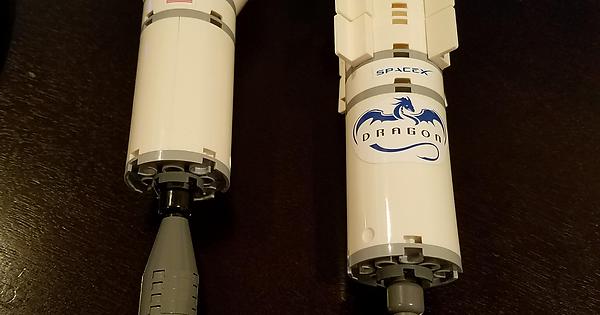 Feel free to use them however you want. If you want a different shot in particular, just ask. Thanks so much for posting this!
Clinton October 6, 2017, 6:19am #13

Thanks for the suggestions and pictures! Currently working on an update:

Lemme know what you think of the new Dragon2 fins.

The Utility Shuttle – http://amzn.to/1Y3l7li – has a satellite with very similar sized solar panels. (Decal + transparent 2x3 with clips). After a slight attachment modification you should be able to fit those, hrmm. Maybe like the dragon capsule needs an ‘in orbit’ rendition/version. Maybe even daisy chain two of them for a greater unfurled solar panel span?

Finally got the prototypes done

Wow. Loving the heavy. Nice work. How are you joining all the stages together?

I just used 61252 and 60478 from the legs. It’s a little too tight though as i had to move the core’s grid fins down to connect it so I’ll probably get something else

Got a couple more parts to try some other experiments. For the 2nd stages, I switched the minifig head (which is expensive anyway) for a 3062b round brick, and then I could use 63965 to thread through the whole engine stack. Now the engines don’t fall off at all on the 2nd stage. For the 1st stage, I tried some 85975 parts, but they tend to be just as fragile as the previous cones. I like their look, but they were hard to find, and I could only find them in white. My next plan is to try out something like the big gear (3649), plus some pins and 18654 bits to be engines. It seems like it would be the best solution, except that it is wider than the rocket and you end up with gear teeth visible on the side. I haven’t tried your new solution though, perhaps that will be better than the other options. There isn’t a way to make it sit flat though, since you can’t remove a 1x1 from the middle engine anymore, right?

The way Lego attaches the solid rocket boosters to the main tank in their shuttle model is pretty neat. They use these double length technique connectors. Ends up being creating one bricks worth of space between the two. Might be worth a try?

The landing legs for the centre rocket might need to be rotated 45 degrees though, so that they interleave with the landing legs on the side cores. That would be a tricky modification, and I’m not sure if that is possible.